Lessons from Waitress, The Musical

It was a simple Saturday afternoon. The record-breaking heat in New York City and the safe haven of an air-conditioned Broadway Theater. The show: Waitress. A down-home America story about a working class town with a waitress as the main character. Her specialty? Pie making.

Little did I know that the true grit of this upbeat yet poignant musical would also showcase some important life lessons. The main character finds herself pregnant by a husband she can’t stand after a drunken night of fun. She unwittingly falls for her obstetrician and he for her. The laughs of the daily grind at the restaurant bring out the best and the worst of the main character and her two waitress colleagues and their boss. We’re reminded of the eternal power of having even just one person who believes in you. This waitress had many people in her corner–even if she didn’t always realize it. Once her baby is born, she finally has the courage to say good-bye to the husband and also the strength to not do the easy thing and carry on with her married doctor.

If you haven’t seen it and have the opportunity, check it out on Broadway. An added bonus was seeing actor Erich Bergen of Madam Secretary fame on CBS in the role of the doc. The power of love, friendship, and the innocence of a child win the day. Whose day can you brighten now by the simple act of a smile, your belief in their dream, or a slice of pie? 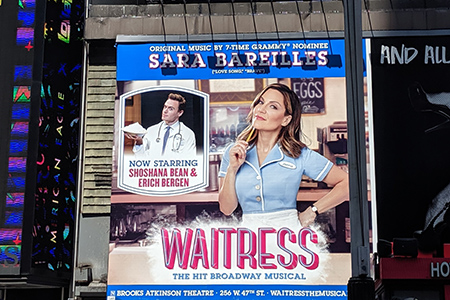