I want to remove emotion out of what is a very dramatic and emotional topic. My goal is always to go by the book–The Constitution. The death of George Floyd in May 2020, ripped apart my city of Minneapolis, started a movement, and left four officers charged with murder. As a lawyer, the term murder isn’t one I take lightly nor should it be taken lightly by the public. When an article written by former prosecutor George Parry was sent to me, I had to talk with him about his assessment that none of the officers in the Floyd case should have been charged. In fact, he says the case involves prosecutorial misconduct.

After a phone call to assess whether George Parry was a conspiracy theorist or sane, I booked him on my radio show, REAL Talk with Roshini, on WCCO Radio. Parry is from Philadelphia and has no connection to Minnesota. His analysis of the medical examiner’s report and how the prosecution came to charges seemed truly credible, especially because Parry himself is a former federal prosecutor. For five years, he was chief of the Police Brutality and Misconduct Unit in the Philadelphia District Attorney’s Office. Parry reviewed the police officer body cam video, studied the ME’s report, and used his own knowledge of the law and police practice for his assessment. You can listen to our conversation from September 20 here or watch it on the Facebook segment that aired live at the same time. 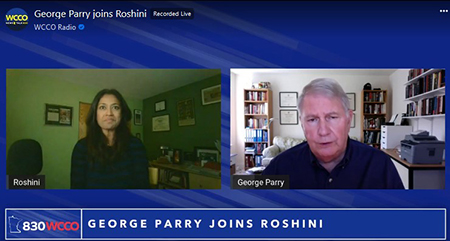