Note to Will Smith: Podium Power Can Include an Apology

The best thing you can do for your brand is to get comfortable with public and impromptu speaking. Trust me. I’ve had more than 25 years of practice as a broadcaster and professional speaker along with my work of the past 16 years as a crisis and executive strategist. A good lesson: Words matter. Intention counts. Less is more.

That’s especially true when you are an international superstar like Will Smith. In case you left Earth on March 27, two of the world’s biggest names had an altercation on the Academy Awards stage during the international telecast. Whether you are Camp Will Smith or Camp Chris Rock, we can identify good and bad reactions to what is now a major crisis on Hollywood’s hands.

I’ll make no bones about the fact that Chris Rock’s joke at Jada Pinkett Smith’s expense was ill-advised. For those who didn’t know, and many didn’t, the actress has had issues with alopecia–patchy hair loss–and has been public about her pain. That said, her husband’s over-the-top reaction to Chris Rock’s tasteless joke was in no one’s best interest. Sadly, Will Smith ran up onto the stage and slapped Chris Rock. Then back in his seat, shouted expletives at the comedian who was in the process of handing out an award for best documentary feature. Even though this all started with Rock’s tasteless joke, I do give him points for holding himself together and getting on with the award. Sad for Questlove and his own big victory getting overshadowed by the events of the previous few minutes.

IDEAL ACTION: This chaos really took place over two incidents. The initial slap or punch by Will Smith. Then Smith’s awards speech: About an hour later once Will Smith went to accept his Oscar for best actor, he should have immediately apologized to Chris Rock, to show producers, to his fellow actors, and the world for acting class-less in such a public space. But first and foremost, to the guy he assaulted on stage and shared some words about how he’d take up issues with Chris Rock after the show. The crisis coach in me was trying to telepathically message Will Smith: “Apologize to Chris Rock. Apologize to Chris Rock.”

WHAT DID HAPPEN: Instead, Smith waxed philosophical about protecting his family and those he loves. Visible tears flowing, he gave a speech about rambling topics and skirted around his bad behavior at hand–even calling Denzel Washington’s name into the mix over what the devil does to you when you’re at the top.

CRISIS NOTES: Not only was this NOT an apology. Smith’s words showed arrogance, ignorance, and a general lack of dignity. This behavior certainly didn’t match the brand he’s created over the years nor what he professes to represent in our chaotic world. Twitter was going crazy in real-time as events unfolded onstage. I can only imagine what Smith’s team was thinking or doing behind-the-scenes. When in doubt, less is more. Certainly, trying to turn the tables and act like you are the exact opposite of what your behavior just portrayed is never a good idea or a bold move.

WHAT’S NEXT: I hope we can all learn some basic crisis reaction notes from this terribly bad live-action movie on the Oscars stage.
1. Realize it’s never too late to do the right thing, even if it comes immediately after you’ve had several minutes of bad behavior.
2. Identify what’s really going on and address those items with the respective parties–preferably in a neutral and private setting.
3. Create a message or messages for all stakeholders connected to you and your actions.
4. Understand people are going through different issues; seek understanding rather than judgment, especially before punches fly.
5. If you are in a place to act, for example, like the attorneys or security protecting the people connected to the Oscars event, you also have a duty to ensure safety and equity for all involved–event if it means challenging a high-profile person behaving badly. 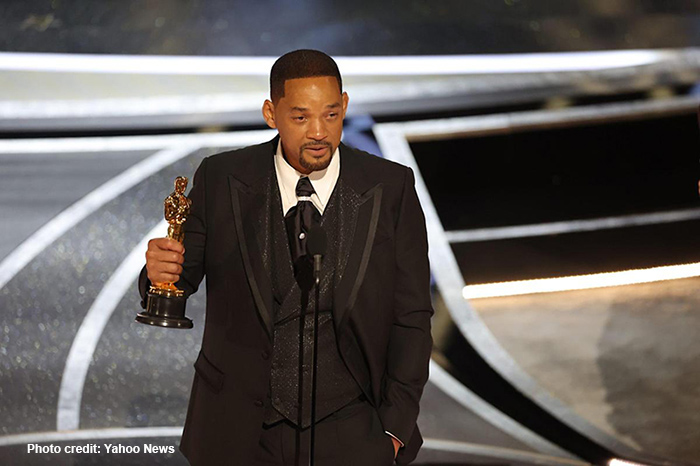